A March toward higher prices for commodity resins 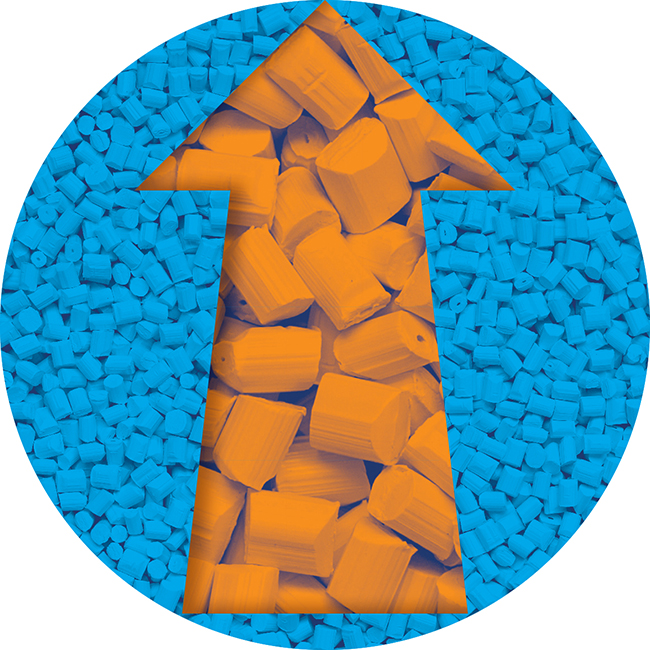 Strong demand and tight supplies of commodity resins have continued, sending prices for most materials up since March 1.

Resin makers in the region are working to recover from Winter Storm Uri, which knocked out production at many resin and feedstock plants in Texas in mid-February. Although many plants have restarted, most are operating at reduced rates.

Prices for all grades of polyethylene moved up 7 cents per pound in March, after increasing by that same amount in February. Prices had increased by 5 cents in both January and December, as the market was tight even before the storm hit. North American PE prices are up a net of 39 cents since January 2020.

Prices for polypropylene for March remained unsettled as of March 25. Although demand remains strong, prices for propylene monomer feedstock fell in March, since many PP resin plants were running at reduced rates.

PP prices had surged an astonishing 61 cents per pound since December but now are expected to decline along with propylene. Market sources said the drop could range from 6-16 cents.

Prices for suspension PVC moved up 7 cents per pound in March, following hikes of 3 cents in February and 4 cents in January. Demand is up, as processors that sell products into the building and construction markets look to build inventories.

North American PVC prices now are up a net of 29.5 cents per pound since January 2020. Construction-related uses, including pipe, account for around 60 percent of PVC sales in the U.S. and Canada.

In solid polystyrene, prices moved up 9 cents per pound in March. Prices had climbed 2 cents in February and 5 cents in January. The March increase followed a 40-cent-per-gallon increase in the price for benzene, which is used to make styrene monomer.

PS prices since January 2020 now are up a net of 28 cents. Benzene prices had been down slightly in February but closed at $2.83 per gallon for March.

Prices for PET bottle resin moved up an average of 4 cents per pound in March after increasing 3 cents in both February and January. Beverage suppliers are building inventories in advance of higher consumption during warmer summer months.

Although production of PET bottle resin itself was not much affected by the cold snap, some plants that make feedstocks needed to make the resin were down. PET prices now are up a net of 8.5 cents per pound since January 2020.

In a March 23 webinar hosted by the Manufacturers Association for Plastics Processors, market veteran Bruce Flannery said regional operating rates for PE and PP had improved to 75 percent after bottoming out at 12 percent at the height of storm damage. He added that PE/PP operating rates could be back to 85 percent by the end of the month.

“These supply challenges aren’t going away quickly,” said Flannery, commodities product director for resin distributor Amco Polymers in Orlando, Fla. “Suppliers are incentivized to come back up as soon as possible because of these high prices. And high prices haven’t driven away demand.”

“We have a chance to get back to normal [supplies] by the end of June, but restocking the supply chain will take most of the third quarter,” Flannery said.

Amco Engineering Thermoplastics Product Director Jeff Schultz added on the webinar that supplies of many engineering resins also are very tight. That list includes polycarbonate, nylons 6 and 6/6 and many specialty styrenics.

Schultz said makers of both commodity and engineering resins “are shipping from production, not inventory.”

“Material isn’t even going to warehouses before it’s being shipped out,” he said.

A stronger-than-expected economic recovery from the COVID-19 pandemic also has played a major role in resin demand, as sales of many consumer products and even durables such as appliances have increased. Schultz said U.S. consumer spending on durables grew by almost 12 percent between the second and third quarters of 2020.