Heading into June, the pricing trajectory for volume commodity resins was once again mixed. While prices of PE, PP, PVC, and ABS were trending downward, prices of PS, PET, PC and nylons 6 and 66 were moving in the opposite direction. Key factors contributing to the downward movement included an apparent slowing of demand, higher supplier inventories, and lower feedstock prices. In contrast, rising feedstock costs was the main driver of the upward movement for certain resins.

These are the views of purchasing consultants from Resin Technology, Inc. (RTi), senior editors from PetroChemWire (PCW), CEO Michael Greenberg of The Plastics Exchange, and Scott Newell, executive  v.p.  polyolefins at Spartan Polymers. 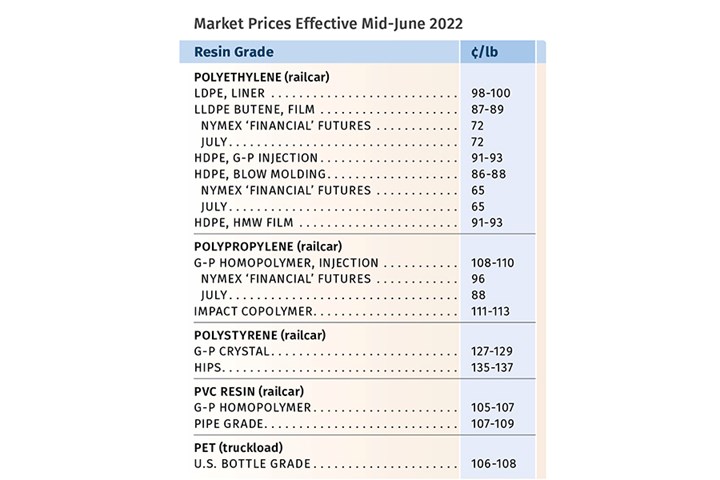 Polyethylene prices remained flat in May, despite suppliers aiming to push through their consecutive April and May increases of 6-7¢/lb each, according to PCW senior editor David Barry, The Plastic Exchange’s Greenberg and Robin Chesshier, RTi’s v.p. of PE, PS, and nylon 6 markets. In May, Greenberg reported, “The PE market has not regained its upward momentum after failing to secure any of the price increase in April. Producers made a valiant effort to implement the delayed increase in May, but at this point it does not seem likely to stick this month either.” 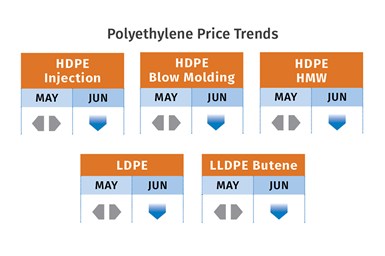 Both Barry and Chesshier thought a downward trend for PE prices was likely in June and July. They characterized the market as well supplied, with demand showing some slowdown, and new capacity from Shell being brought on stream. “I think April was probably suppliers’ last chance for getting an increase based on market fundamentals,” said Barry. Noted Chesshier, “Barring any major global event or natural disaster (in what is forecasted to be a higher-than-average hurricane season), the market is positioned to see lower prices.

Polypropylene prices in May were poised to drop by around 7¢/lb as the late May settlement of propylene monomer contracts dropped from 71¢ to 61¢/lb.  PP suppliers came out with 6¢/lb “non-monomer” increases (i.e., profit-margin expansion) and it was quite plausible that they would get part of that as one major industry index showed a gain of 3¢/lb, according to PCW’s Barry, Spartan Polymers’ Newell, and The Plastic Exchange’s Greenberg.

Noting the lack of justification for suppliers getting any further margin increase, Newell said, “It’s a shame because the market is pretty bearish. The monomer should be getting squeezed based on production fundamentals (less monomer is produced during the busy driving season), yet prices dropped, which tells you the story.” He noted that warehouses are full and processors and downstream customers are holding up orders, as demand continues to be lackluster. Moreover, PP spot prices had dropped. 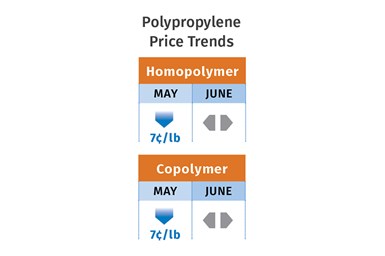 Barry noted that while PP suppliers maintained that the market was tight due to a couple of unplanned shutdowns, processors had no problem getting material, except for specific grades that contain certain additives. “It’s more of an issue with availability of additives such as antistats or peroxide for high-flow grades—part of the lingering logistical supply issues. In truth, suppliers’ margins are high.” Moreover, he noted that PP plant operating rates averaged in the low 80s percentile. Both he and Newell ventured that PP prices in the June-July timeframe would be flat to slightly lower. Barry also noted that Heartland Polymers’ new 1.15 billion-lb/yr PP plant in Alberta, Canada,  was expected to produce about 100,000 lb of homopolymer and random copolymer in an initial mid-June startup, though full production would not commence until end of third quarter.

In contrast, Greenberg said suppliers were looking to offset the 10¢/lb monomer price decrease because going into May, their collective PP inventories were at the lowest level since August 2021. He said this, along with the approaching hurricane season and relatively balanced-to-tight  supply vs. demand—due to some lingering force majeure issues—was the basis for their actions. Meanwhile, at least one major supplier issued another non-monomer increase of 5¢/lb for June.

Polystyrene prices in May moved up another 5¢/lb, having risen a total of 13¢/lb in the two previous months, and further upward movement was likely in June and July, owing primarily to higher benzene prices and benzene supply constraints, according to both PCW’s Barry and RTi’s Chesshier. “PS suppliers are pricing themselves out of the market, while at the same time PE and PP prices are trending down. Industry statistics show a double-digit drop in PS demand that includes domestic and export sales, with plant operating rates at their very lowest point,” noted Chesshier. 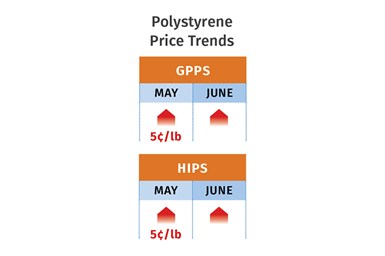 Barry ventured that June could be the last month of styrene monomer tightness, caused by earlier unplanned outages that were expected to be resolved. “I think PS resin prices are in for a correction in the second half of the year.”  He noted that contributing factors could be increased imports of lower priced styrene and PS resins, along with a potential styrene monomer price correction as supply becomes more balanced.

PVC prices in May were flat, as the proposed 3¢/lb contract price increase was not fully supported and demand was slowing, according to both Mark Kallman, RTi’s v.p. of PVC and engineering resins and PCW senior editor Donna Todd. Kallman predicted a flat-to-downward trend for June and July, with potential for a 2-3¢/lb decline, cutting into the 4¢/lb suppliers gained in March and April. He attributed this possibility to underlying issues such as single-family home startups dropping for two consecutive months and interest rates rising by 2% since the start of the year. 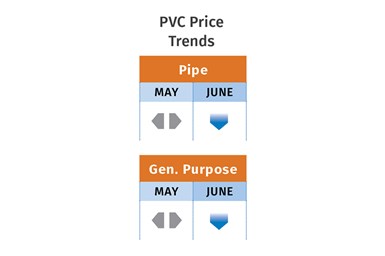 Todd reported that pipe converters would have welcomed another resin price hike to help them support a raise in pipe prices, or at least help hold them steady. However, she noted, “Resin buyers in other downstream markets felt that PVC pricing had peaked and that, barring a hurricane this summer, pricing would flatten out over the next few months before starting to slide.”

PET prices were rising by 8-9¢/lb in May, reflecting significantly higher prices of paraxylene precursor for key feedstock PTA, according to RTi’s Kallman. He saw the pricing trend for the June-July timeframe as somewhat flat. While he expected there was potential for some price erosion in the third quarter, he considered that more likely to occur in the fourth. 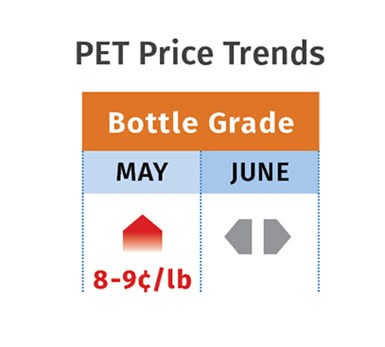 “We’re subject to price volatility of oil and natural gas driven by exceptional demand for gasoline. So, these higher PET price levels could continue during the heavy summer driving season.” Kallman also noted that demand continued to be seasonally strong and that imports had increased, whose prices are now on par with domestic PET.