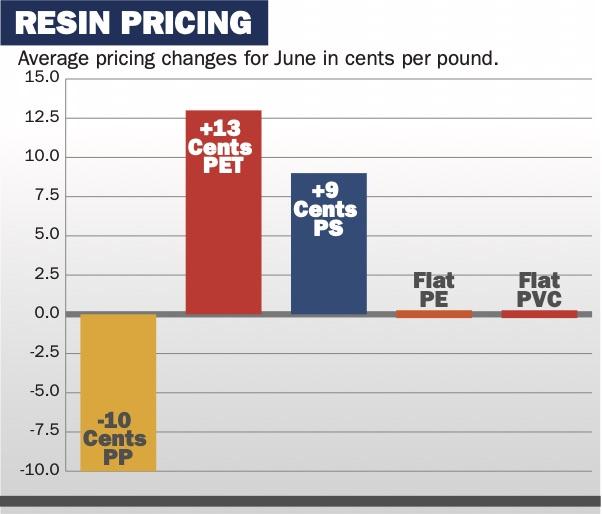 North American commodity resin markets were varied in June, with prices for two materials up, one down and two flat.

PET bottle resin continued its incredible pricing surge in 2022 by jumping 13 cents in June. Prices for the material were up 6 cents in May and now are up 48 cents so far in 2022.

Strong seasonal demand for bottled water and other beverages has played a role in the price surge, as well as a lack of new capacity and freight and logistics challenges. Higher gasoline demand also has lifted prices for paraxylene, a PET feedstock that is also used as a gas additive.

Regional polystyrene resin prices jumped another 9 cents per pound in June, as a strong gasoline market increased prices for benzene feedstock. Prices for benzene — used to make styrene monomer — soared 68 cents to $4.79 per gallon in June, a hike of almost 17 percent. The 9-cent June hike for PS comes after a 5-cent increase took hold in May. Prices for the material now are up a total of 32 cents since February.

On a June 29 webinar hosted by the Manufacturers Association for Plastics Processors, resin market veteran Bruce Flannery said that strong demand for benzene from the gasoline market is driving prices higher. Benzene is added to gas to increase its octane rating, which can improve engine performance.

“At these prices, we can expect [PS] demand destruction and product substitution for the rest of the year,” added Flannery, commodities product director with resin distributor Amco Polymers in Orlando, Fla. “This isn’t something polystyrene makers want; it’s being hoisted on them because of gas.”

PS imports are trying to reach North America, but logistics are slowing these shipments and domestic PS makers don’t have much inventory on hand, according to Flannery. “Suppliers are still trying to fix [production] problems from earlier this year,” he said.

Looking to July, PS buyers might have a rough time, with price hikes of 20 cents or more possible because of the benzene market.

Polypropylene prices in the region tumbled 10 cents per pound in June, matching a similar price decline for polymer-grade propylene (PGP) feedstock. Prices had declined 7 cents per pound in May. Combined with other increases and decreases, PP prices now are down a net of 5 cents so far in 2022.

Strong North American gasoline demand is increasing supplies of propylene, which is a byproduct of gas refining. Demand is up from the summer driving season and from refineries working to get back to full production after the pandemic.

Those higher propylene inventories then cause prices to decline, with those declines passed on to the PP market. As a result, just as gasoline demand is driving PET and PS prices higher, it’s having the opposite effect on regional PP prices.

U.S. gasoline data provides a complex picture. Production actually fell 6 percent between July 2021 and July 2022, according to government reports, with demand also down 8 percent, even as miles traveled have almost returned to pre-pandemic levels.

The wild card has been U.S. gasoline exports, which are up almost 30 percent as domestic suppliers try to fill the global gap caused by lower production and sales from Russia because of the Ukraine crisis. The headline number as usual is the national average per-gallon price, which was at $4.44 on July 21. That’s down from $5 in mid-June but still up 40 percent from that date in 2021.

On the MAPP webinar, Flannery said that PP prices have been falling even though four regional PP makers are operating under force majeure supply limits for various reasons.

“There’s excess PGP, and it looks like that will continue,” he added. “[PP buyers] don’t want extra resin on their floors with these price swings, so everyone’s destocking.”

Regional PP supplies will be increased by Heartland Polymers’ ongoing startup of 1 billion pounds of capacity in Strathcona County, Alberta. ExxonMobil Chemical will bring on a similar amount of new PP capacity in Baton Rouge, La., by the end of the year.

North American PVC prices were flat in June for the second consecutive month after climbing an average of 3 cents in April. Regional PVC prices are up a net of 1 cent per pound since Jan. 1. PVC availability in the second half of 2022 could be affected by outages reported in June at feedstock plants operated by Westlake Corp. and Olin Corp. in Texas.

Construction activity is a main driver of PVC consumption. U.S. housing start activity in May came in at an annual rate of almost 1.7 million, flat vs. the same month in 2021, but down 7 percent vs. April. This trend might be an indication of PVC demand leveling off.

Regional polyethylene prices also were flat in June, after producers won a 3-cent hike in May after an extended battle. Prices had been flat in April, as buyers held off a 6-cent hike for which producers were pushing hard.

PE makers have been trying to push through a 5-cent increase for July. Regional PE supplies will be impacted this year by the startup of Shell Chemical’s massive 3 billion-pound-capacity PE unit in Monaca, Pa. Market watchers said the site could be shipping commercial amounts of PE as soon as July.